I’m not a hoarder, but I did save too many clothes from my high school days.  I figure, if I’ve had them this long why toss ’em out now?  At first it was not intentional, because I did not save the best stuff.  But they were back in the bottom of closets and drawers for years or I have had them packed in boxes then went unopened from house to house in my couple dozen moves since high school.  I’m not going to wear the bulk of them, the stuff I do wear is just hanging out in my closet all non-nonchalant like they haven’t been around forever.  A couple days ago I was attempting to organize my world and came across several boxes labeled, “old clothes”.  Now I will show some of them to you.

If this ad campaign is lost on you watch this video:

Certainly in the 1990s and some would argue even today, Michael Jordan was THE athlete.  The only one that mattered and the one companies wanted in their ads.  I got this sweatshirt from the grocery store my family owned.  Often companies would give items like this to a manager of whatever department and unless someone else wanted the items or if they were to be given away as a prize, my sisters and I were given them.  I shared this sweatshirt with a cousin of mine.  We traded it back and forth for years.   Somehow I ended up with it in the end.  Your welcome MJ, I was your own personal billboard for many many years.

Speaking of the grocery store, here is one of my work shirts.  Bell’s Supermarket all the way!  I wore this while I rang up groceries, and swept floors and filled pop machines.  Filling pop machines was great in the summer and the worst punishment in the winter.  Sweeping floors was punishment year round.  I kinda miss grocery store work, it’s easy and relatively stress free.  Hmmm….new direction in my job search maybe. 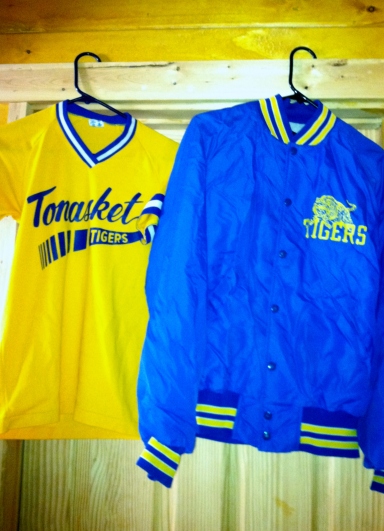 MY SOFTBALL GARB! It’s a really old jersery and the ugliest coat ever made.  I really hated those coats.  I think my senior year we ordered new ones and I was very relieved not to have to wear the poofy mess again.

Confession:  I stole the shirt on the left.  I remember clearly that we hated our jerseys and decided to rummage through the old vintage uniforms that were hanging around the sports closet.  And, we took them.  I think we even wore them to a few games.  Sorry Mr. Gardner.  I’m not giving it back though.

This one is hilarious.  Remember Delia*s?   If you are female and between 28 and 38 you probably remember it very differently than it is today.  For most of the 90s, Delia*s was ONLY available through catalog order.  I saved most of my grocery store dollars and checked the mail every day waiting for those catalogs.  I’d carefully plan out what i was going to buy, fill out the order form, and wait very impatiently for my new treasures to arrive.  And being as we lived in boondocksville, Delia*s was vital to my wardrobe as there were no malls anywhere around us.  This is one of the outfits I waited for.  Ouch, it’s ugly.  We’ve got some pants large enough for three of me and a sweater that is alright, but not exactly flattering.  It gets worse.

I guess you can’t really tell from the photo, but the top of the pants is a good inch or two above my bellybutton.  Low rise jeans had not made much of an appearance at this time and we were all kinda sporting mom jeans.

Oh Lord look at that butt.  No wait, you can’t.  The pants are far too barrel shaped to see any curve whatsoever.

Here’s another item from Delia*s.  I bought this for a dance, one of those girl asks boy dances.  I didn’t really ask another boy so much as one of my friends had a friend who was visiting from out of town and she told me I should bring him.  I found a picture from said dance.

I’m honestly not embarrassed by the guy I went with, but I literally have not seen him since and I have no way of knowing if he would hate me posting his picture on my dumb blog.  Please note, I am obviously wearing nylons.  I’m much paler than that.

I’m going to skip the remnants of my obscenely large shoe collection that I still have.  Thanks for spending ten minutes looking at clothes I wore in the 90s and will never probably wear again!

11 Responses to My Old Clothes