This weekend the Pilver family crammed into the car and drove a couple hours to my nieces birthday party.  She celebrated at a bowling alley complete with an arcade and roughly 74 screaming kids.  I like bowling alleys, what’s not to like?  There’s bowling, which is fun even if you are as terrible as I am.  You can always find gobs of junk food.  One rum and coke served is roughly the equivalent of seven rum and cokes and they charge you two dollars.  They have an arcade!

I was pumping quarters into the skee-ball machine, hogging it from all the little kids with big patient eyes when Mr Pilver came up to me and told me he had to show me something.  There was a Terminator Game: 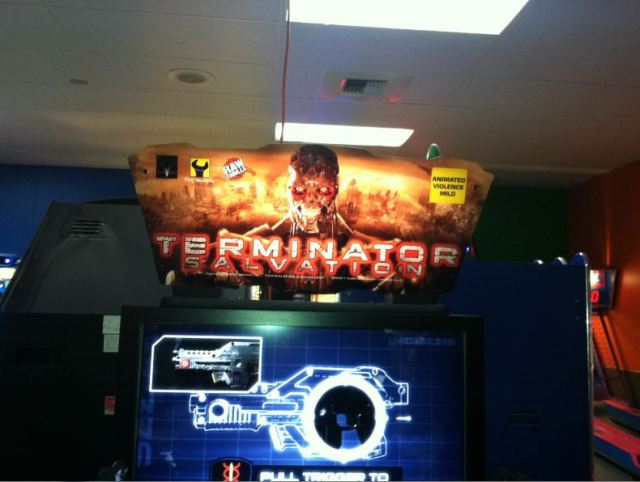 Here we have a gruesome face and an image of a gun, pointed directly at my face.  Now, in my best Crocodile Hunter voice I’ll say, “Let’s have a closah luk!”

I severely doubt many parents hand their kids a pile of tokens and remind them to only play the non-violent games.  It’s basically a frenzy of running from game to game and plopping the tokens in and grabbing tickets and moving on as quickly as possible.   But, why bother having the stickers when they really mean nothing at all?  Although, in reality, skee-ball can become highly violent when you are playing next to the young boy with bad aim who just inhaled twenty-four ounces of Mountain Dew and a few packs of Starburst.