Yesterday I showed you the new Mountain Dew flavors. The grocery shopping trip where I bought those was limited edition soda heavy as I also found American Idol Coke.  The end cap of the supermarket aisle had a bin full of little round bottles of Coca-Cola.  It’s a given that I am a sucker for such marketing gimmicks and of course I plopped a bottle of the soda into the cart without a second thought.

Seems to be that all soda companies are introducing new flavors or re-vamping old ones in attempts to keep your dollars in their pockets.  However, Coke just cannot do that.  Sure, they can add lime/vanilla/lemon/cherry and whatever to the original formula.  Die hard coke fans aren’t going to buy these varieties.  The beverage giant has been left with no other option than to simply change the shape of the drink’s container. 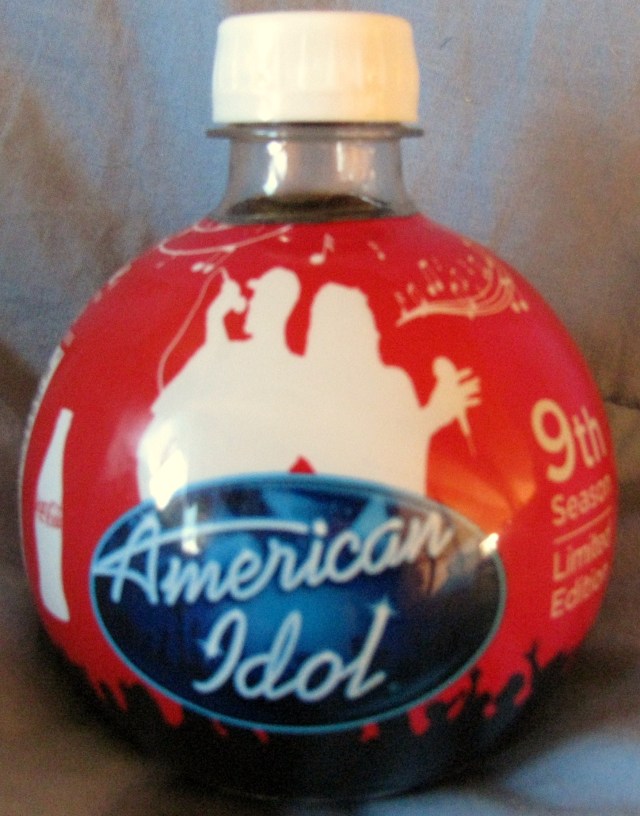 The cost: one dollar.  One dollar of round soda fun.  This is a special edition American Idol  9th Season bottle, being that if you drink enough of them you turn into Ryan Seacrest.  Of course I went home and wasted some brain cells on researching the origin of the bottle.  Were there actually more season’s with their own special bottles?  Why is it round?  I wanted to get the facts out there.

Turns out I found that seasons one through three had their own glass bottles.

I could not find any bottles meant to commemorate season’s four through eight.  Why now, at season nine did they decide to push singing soda bottles once again?  WHY are they round?

A short search for round coke bottles gave me a hypothesis. Apparently last Christmas Coke dressed up the little orbs with St. Nick.  If I had seen them at the time, I would have consumed the soda, tied a string to the neck of the bottle and slapped it on the tree next to The Max’s macaroni and magic marker ornaments.  My guess is they either had left over bottles or simply wanted to use the unique mold once again.

I feel I’ve solved a mystery.  I feel like Nancy Drew.   I’ve never read a Nancy Drew book in my life, but I imagine she felt as satisfied as I do at this moment.  As for American Idol, I don’t watch it.  Certainly not because I am too good for overnight singing sensations . Television reception is non-existent on the mountain.  Tell me who wins.

killing spiders with my laser eyes.
View all posts by kristiane →
This entry was posted in Blogroll and tagged American Idol, Beverages, Christmas, coke, Mysteries. Bookmark the permalink.