“If you worried about falling off the bike, you’d never get on.”

Max received his first bike when he was four.  He rode it until the tires wore thin. It had training wheels and I would raise them so that he might get the hang of it, but he never wanted them off.  When he was six he got a new bike…no training wheels.  He rode it less than ten times and each time was with me running behind him and holding onto the seat down Grand Ave in St. Paul.  I imagine we were a sight.

Today, I had some fun to attend, so I brought Max to the cousin’s.  Cousin had an old bike that has gone unused for years in their garage.  She told him to get on a ride it.  So he did. The boy did not fall one time and didn’t hesitate in his balance.  I (like a girly-girl) yelped and shed a  happy tear.  My little guy is now a bike rider.  Fine, fine day. 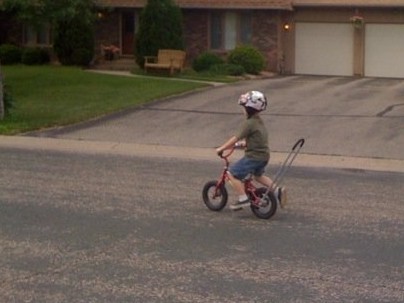 killing spiders with my laser eyes.
View all posts by kristiane →
This entry was posted in Blogroll and tagged bikes, kids, yay. Bookmark the permalink.

4 Responses to “If you worried about falling off the bike, you’d never get on.”