My work changed buildings a couple weeks ago.  We went from a historic decrepid building, perfect for the Hell’s Kitchen theme, and now we are in a space previously occupied by a swanky steak house that played live jazz.  The new building is really far out and such, but it is also three times as big.  Which means that they now schedule three times the servers.  However, this does not mean that there is three times the business, though I stand with fingers crossed that someday it will.

I decided that since I am not making money anyhow, I would drive for awhile, take some pictures, and swim in hotel pools.  Three of my most favorite things.  This is very different than my summer excursions, being as I basically got in the car, sans map, and drove.  This also means that I am not really researching my picture taking opportunities and looking for odd things on the fly.  I have to note before I show the pictures, I came upon tons of Amish folk today.  I wasn’t sure of the rule about taking photos of the Amish.  Are they the ones that thing the camera captures your soul?  I did not chance it, though it took Goliath style restraint.  As I was looking at one womans get-up I thought, “I wonder where they buy those clothes?  They must make them.  Do they as well make the fabric?  Would they let me buy some clothes?..”

Ladies and Gentleman I present…SHIP SHAPE! 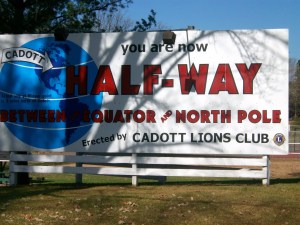 Have you ever wished to be the center of someone’s world?  Well, if that does not work out, you can always go to the CENTER OF THE NORTHERN HEMISPHERE!

Standing at the degrees of 45 and 90, which means goolash to me, this is halfway between the equator and Santa Claus.  Halfway between that Greenwich line and…I don’t know.  There’s  a billboard and we stopped.

Oh, yeah, did I mention that I took The Max out of school for my drive fest?

And then, The Big Cheese…pun intended though regretted.

What I found surprising about Lambeau Field was that it is not in a city atmosphere whatsoever.  I guess I knew Green Bay was not New York CIty to begin with, but this is a major stadium next to the Piggly Wiggly in a suburb.  It is also across the street from a neighborhood.  I mean these people can take ten steps off their front lawn and they are neck deep in foam cheese heads and Pabst.

More tomorrow…the pool here is really warm, unlike the one yesterday, and it’s open ’til 11.

THIS…is what student loans are all about 😉