There’s a debate in my head that’s been going on this week. My goal is to once a day sit down and smack my hands against the keyboard and hope that one of a hundred of those days I might put something out I am proud to have written. What I choose to say varies. I certainly don’t have a format or structure that I follow as in this is a blog of hobby. I have met a lot of people from blogging, which I understand sounds peculiar to some. But, most of you understand what I mean. Most of you I have never been allow the pleasure of engaging in hand-shaking or even hearing your voice. This is life on the internet.

Sometimes, you break over that electronic barrier and get the opportunity to sit across a table from someone in a crowded bar while attempting to make yourself drunk enough that you are not nervous, but not too drunk so you don’t make yourself into a Lohan-esque fool. I chose to do this a year ago with a blogger, tg aka Tim aka boyfriend extraordinaire. I was hesitant, at best. I had developed a friendship with the person, and honestly feared I might really like him. Not in the way I like your new shirt, but in the way I had been avoiding for the past five years since shoving the idea of relationships into a bottle and corking it tight.

We’d emailed. We’d instant messaged. We’d even texted. But never spoke on the phone or saw each other in person despite that we lived in the same metropolitan area. And then he said this: 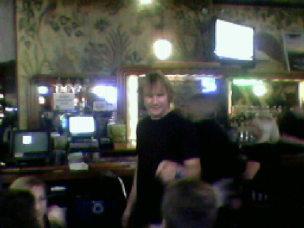 It’s not the best picture, but I promise you, there’s a resemblance.

Ok. Now I will stop with the trip down memory lane and use a cliche’ I hate, “cut to the chase”. I have a list of things I need to and want to do, like

Be a good Mom

Write a blog every day.

Work my laundry down to a pile shorter than myself.

Today, specifically, I wanted to finish my weekly Spanish classes and write a blog. And I will. But something is in my head now, that was not there before. Tg has cancer. It was a funky mole, that was diagnosed as melanoma. Skin was cut on either side of the mole, and came back from the lab as clean and melanoma-free. Big sigh of relief. Next step was a CT scan. I know all forms of cancer are not a good thing, but in the realm of cancers, this is near the bottom of the list of ones you want to have. What has been described to me as “flecks of melanoma on the lung” were found via the scan. I would like to think a miracle doctor could reach down his throat with a sharp tool and snip them off, but I am told it is not that easy. There’s gonna be “treatments”, which I am scared of more than the cancer. Though I am sure they will be beneficial. I am uncomfortable with things I do not understand. I do understand what foods are good and bad with cancer, and hopefully I won’t drive tg away with the broccoli and flax seeds I wish to prepare for him daily.

And I feel guilty. I chose to poison my own lungs for years, yet I don’t have to suffer. I don’t have a desire to be grim. I don’t want to sit and drone about this and nothing else for months. This is what I have been debating about, do I keep it personal, or do I share? I certainly don’t want to rake in attention. I am not asking for advice.  I want to fix it, and I do not know how.

Being as I talk immensely about my offline life on this blog, I have had a tough time writing this week, because it has been on my mind quite a bit. And just so you know, he’s not sick. No typical symptoms have been shown. I am very hopeful things will remain this way.

Ok, tomorrow I will talk about Martha Stewart’s Halloween issue. Now, I’m going to go and speak Spanish phrases I do not understand into my computer’s microphone for my online clase de espanol.

killing spiders with my laser eyes.
View all posts by kristiane →
This entry was posted in Blogroll, food, health, home, how to, Life and tagged blogging, Life, people. Bookmark the permalink.