Every part of me has been meaning to get on here every day and write.  Obviously this has not happened.  I sort of feel like I have been skipping class or family dinners and I am trying to quietly sneak back into the group without anyone noticing that I have been all but absent from my circle of bloggerific friends for over a year.  Computers breaking, having a rambunctious two-year-old and a busy twelve-year-old, attempting to complete a set of chores around the property, as well as gearing up to have a baby have all prevented long lazy nights of blog writing, reading, and commenting.

So yes.  The Max is twelve.  He was only five when I started this site.  He is absolutely twelve with his music and his video games and his not-so-secret crushes at school.    I don’t love having my child enter adolescence, but he still give me hugs when I ask so for now we’re good.

Lucy is two and a half.  Her favorite activities include taking off all her clothes because she hates all clothes, spreading goopy food on smooth surfaces that have recently been cleaned by myself, and learning all her letters via PBS cartoons.  I can take zero credit for teaching her the alphabet, I basically found out as she was naming all the letters on the outside of a book lying on the coffee table.

Speaking of spreading foods on clean surfaces my computer is up and at ’em again!   Recently it donned a layer of ketchup right over the entire keyboard.  I allowed the ketchup to dry and amazingly it peeled up much like Elmer’s glue does from the back of your hands.  Even took a bunch of the specks between the keys with it.  Bonus!

And then there’s Henry, the four and a half pound wonder, still wiggling around in my belly waiting for just the right time to make his hospital debut.  I’m due in June, fairly close to the center of June.  I’m anticipating that any one of June’s 30 days may be the winner of the birthday of whom I plan to have be my last child.  (That last sentence is a wreck, but I’m too lazy to rearrange the words to easily make sense.)

I supposed, this being my last pregnancy and always having fairly easy pregnancies, that I would adore and cherish this last round of maternity bliss. My previous gigs growing kids inside me were not perfect and problem free, but there was always so much more good things that uncomfortable or painful.  This time it’s different.

I’m carrying Henry completely in front, or as I’m often told, “You’re ALL baby!”  I didn’t realize before, but when a woman does carry the baby completely in the front, often times all circulation is cut off to the legs and the result looks like something out of the Stephen King thriller, Misery. 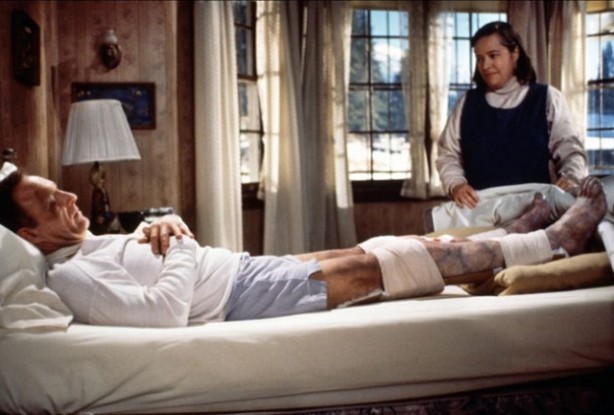 I’m not at all joking.  There are places on my legs that appear as though I have been beat with a bat.  It’s not just unattractive, it’s painful.  Apparently much of this will go away and what does not can be fixed by a doctor.  Clearly my legs are not as severe looking as his, but if you ever see me in shorts or a bathing suit again I will likely have had surgery to have veins stripped.  I know vanity is a sin, but then again so is wearing a skirt above your ankles in some cultures.  Maybe I’ll just move.

This pregnancy has not been all pain and suffering.  I do love the feeling of Henry poking around inside, though I cannot tell the difference between an elbow and a foot.  This child, above all the others responds to me pushing him back as though we are playing some sort of tag game.  I really am trying to enjoy all these last days of pregnancy.  Cause when they’re over, they’re over forever.  And I will never again be denied the privilege of vodka.  Gotta look at the glass as half full, of vodka.

Now that I’ve told embarrassing tales of my children, over shared details of my pregnancy, and made you wonder if I have a drinking problem (I don’t by the way, vodka actually sounds terrible.  I will take a mojito though.) I feel as though we’re getting reacquainted.  I’ll try not to be gone so long this time.