There were plenty of attractions I anticipated while planning for this road trip, one high on the list was Route 66.  In case you have little knowledge of the US, I will let you know that Route 66 was THE way to travel cross country before interstates.  Nicknamed “Main Street of America”, it was a simple two lane highway running from Chicago to Los Angeles.  Our first overnight stop in New Mexico was the town of Gallup, where Route 66 is still in tact.  Gallup seems to be the town where movie stars in the mid-twentieth century went to play.  A specific destination was the El Rancho Hotel. 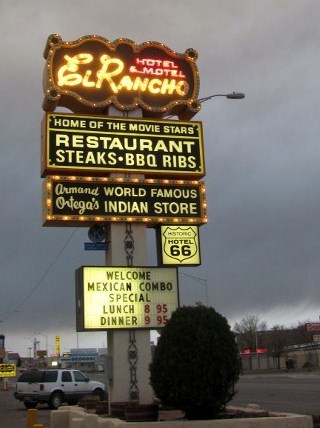 The interior of the hotel is decorated with the old west in mind.  Covering the walls are pictures of actors your parents went to the theater and paid a quarter to watch in movies on Saturday afternoons.  Among them, John Wayne, Humphrey Bogart, Jack Benny, and our nations 40th president and my father’s hero, Ronald Reagan. 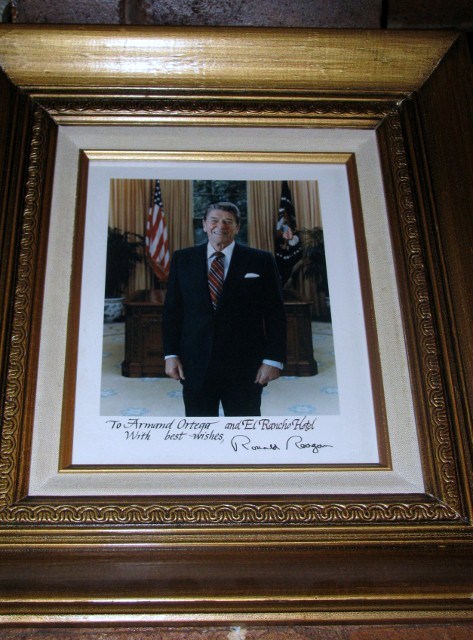 The restaurant in the hotel names it’s meals after the stars who visited the location.  The Ronald Reagan was a cheeseburger with a side of Jelly Beans.  This, of course, thrilled The Max and of course his dinner choice was made easily.

Mr. Pilver and I chose Mexican dishes.  I am a lukewarm fan of Mexican food, mostly for the fact that Mexican food in the northern part of the US is typically horrible imitations built with the contents of canned beans and chilies.  This was such a fantastic change from what I find here.  The food was amazing.

What I really wanted to see on Route 66 were the vintage motel signs.  When I was a kid, and my parents would shove my sisters and I into a car or camper and drive us all over the country, we often would stay at these motor inns with doors leading to the parking lot as opposed to the safety of an enclosed hallway.  I didn’t get the chance to photograph them until the next morning, so I was unable to see them lit up in all their splendor, but I loved what I saw regardless. 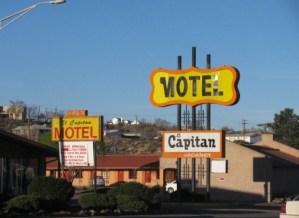 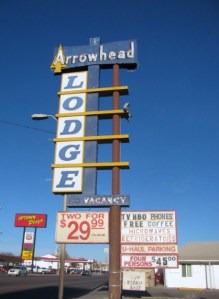 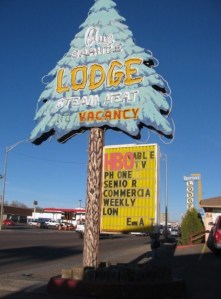 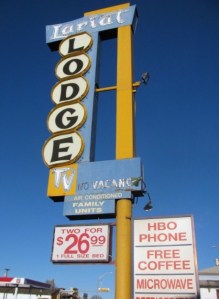 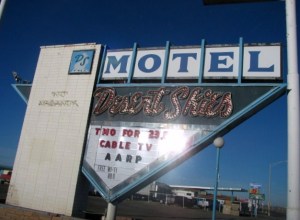 I could post seventy-bajillion more photos of motels, but for the few of you who have continued reading this far, I will attempt and keep your attention with this final amazing find.

Half a dozen years back, I bought a print at Ikea.  I love this picture more than I should.  The Max took to it with a purple sharpie and colored some for his own enjoyment and I was furious.  I told him that until he moved out of the house that picture would remain hanging on his wall as punishment.  It’s not really a punishment, but it’s all I could think of at the time. 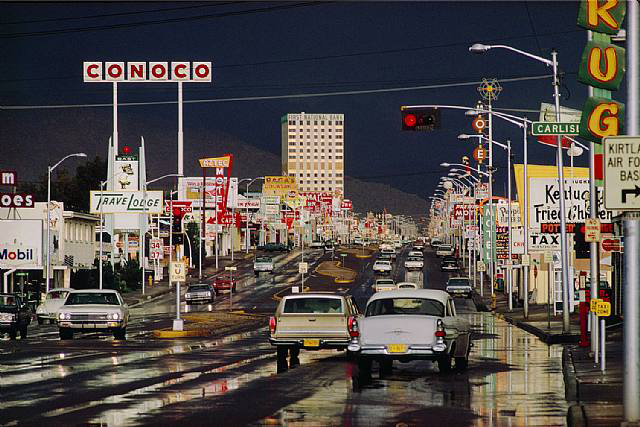 The title of the photo is Albuquerque, 1969. On our last day in New Mexico, we swung through the city searching for this very location.  While we did find it, the artist, Ernst Haas, must have used a special lens because there was no way we were able to squeeze as much of the scenery into the frame as he did.  Here is one photo where you can see a few of the buildings and signs still standing. 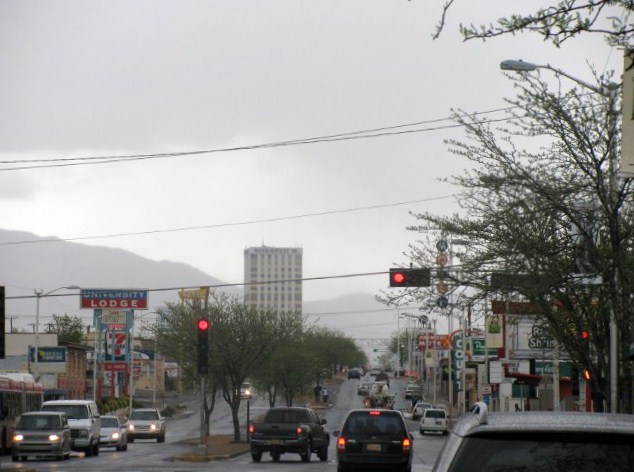 Every time I go on a vacation, I try to decide which of the cities I’ve visited would be my favorite to relocate. Albuquerque wins hands down.  It’s a fairly large city, with nearly 600,000 citizens.  However, it is also very open and getting from the heart of downtown to the stark desert is a thirty minute drive by car.

That’s all I am going to say about Route 66.  I am home now, and typically I write at road trip blogs while on the road, but lack of wifi stalled this tradition.  I have a few more posts to share as we also saw wonderful things like Roswell, The Grand Canyon, and the greatest coffee shop in the west!