As I have mentioned, I now live in the boonies.  It ain’t the wilderness, but you can see the wilderness from here.  This means deer are plentiful, bears are common, as well as snakes, cougars, and bobcats.  Most of the residents in the area are familiar with the wildlife, but to me it’s still a novelty.

There’s a tree on my property under which cell phone reception is always perfect.  It’s a few hundred yards from the house.  When the weather is chilly I’ll drive but if the sun is shining and the air is warm I usually walk over and stand or sit under the tree while I communicate with the world via cell.  Yesterday was be-you-tee-full, and I had a couple calls to make so I threw on some shorts and flip-flops and hiked to The Phone Tree.

I was standing under the tree for roughly fifteen minutes, chatting away when something happened that could only be properly retold with the help of the highly sophisticated computer program, MS Paint. 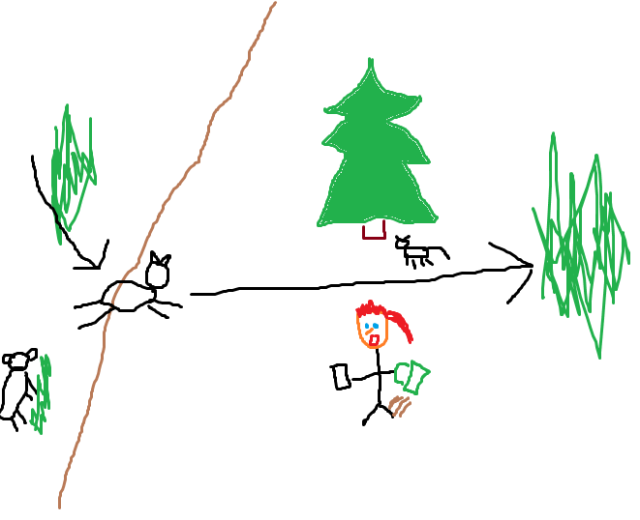 You can see the phone tree there in the center.  I was sipping on a cup of coffee, chatting on the phone.  Our dog Bailey and cat Popcorn had accompanied me on my walk.  Bailey is getting old and is always tired, so she was napping on the hillside (the hillside begins with the fancy brown line and is pretty steep).  Popcorn was chasing bugs around under the tree.

Sometime during the phonecall a bobcat began to stalk Popcorn.  In general, bobcats won’t attack humans, which I why I assume it was the kitten and not myself it was after.  I saw it running, for a nanosecond I thought it was the dog as it was just about the same size and completely black in color.  After that mistaken moment I realized it was a cat, and it was moving so fast.  I am going to emphisize the moment I realized it was a wild cat at this time.

THERE WAS A DOG SIZED ALL BLACK CAT RUNNING SOOOOOO FAST HEADING RIGHT FOR MY KITTEN!

The most remarkable thing to me at that moment was the speed at which the cat was moving.  It was so close to the ground as it ran and clearly trying to catch breakfast.  Now, I found out later after talking with a wildlife biologist that if a cat is running towards you the worst thing to do is run.  Whoops.  You’re supposed to stand your ground and make yourself as tall as possible and scream and yell at it to scare it off.  I did scream and yell and thankfully there were no children around to hear the foul words I was hollering at the person I was still having a conversation with on the phone.  But as I was yelling I was running, swinging my arms and spilling my lovely morning coffee all over my bare legs.

After I reached the house I remembered the kitten was still by the tree and I drove my car back to get her.  She was on a low branch of the tree clearly spooked from the encounter. Popcorn hopped onto the car, I rolled my window down and she climbed inside.

A bobcat sighting is just another day here.   But bobcats are tannish in color with dark spots. What I saw was a large wild cat that was 100% black.  I found a website on the topic where I learned that the technical term for the rare animal is melanistic bobcat.  Only about a dozen of the animals have ever been captured.

So, now I have a quest.  If I don’t find this animal again and take it’s picture, or better yet trap it, I cannot prove to anyone what I saw.  The biologist I spoke with told me that every description I had of the cat pointed to the fact it was indeed a black bobcat, but I am sure in their mind they believe there is a chance I was mistaken.  Together, we went back to the site looking for tracks and found one that was the size and shape of a wild cat’s, so that helped the credibility of my story some.

And while I am certainly frightful of another meeting with the large feline, if I see it again I am determined to prove to the world that I saw a black bobcat–or at least to a few science geeks in the area.