US Weekly was only called US back then.  But if I titled the post “Us circa 1981” you would have probably expect a post about me and my sisters in 1981 sitting in the mud sharing a bag of M & Ms, cause that’s who ‘Us’ was to me at that point in my life.

I was looking at old tabloid style magazines on  ebay last week, but the lack of photos for the listings bothered me.  I found a group of three US magazines from 1981 for about five bucks.  Even after I added the shipping to the cost, it was cheaper per issue than the ones on the news stand down the street, and this was vintage gossip!

It’s quite a change from what you see nowadays.  The pages are not glossy, there’s very few photos in color,  and there’s a whole lost less smut.  Also, they wrote about actual celebrities who are still recognizable today.  I doubt in thirty years people will pick up one of today’s copies and have a clue about the John and Kate stupidity that takes up every cover at the checkout stand currently.

I couldn’t think of a good way to convey any articles.  They are wordy with few pictures.  But the pictures are great, and the ads are even better.  Enjoy! 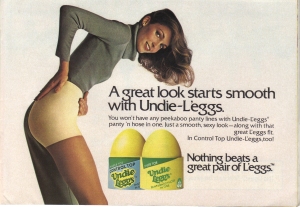 Three cheers for eggshell pantyhose containers!   In the eighties, my mother was the taupe pantyhose queen.  What a weird color to want your legs to appear.  Silly taupe.  She bought them by the dozen and I overtook the shells and  would find infinite uses for environment unfriendly packaging.

Not only did the articles have more words, the ads were essentially articles themselves.   Here we have Humphrey Lloyd and his lovely wife, who bought this bizarre ept test and were able to find out that she was going to have a baby TWO HOURS LATER?!?!  What are the parts used in the test up there?  Do I need a medical degree to figure them out?  Two hours…I cannot get over that.  When I found out about Max, I used an at home test.  The directions said results in three minutes and the results were two lines and not one.  Quick, easy, over.  Here you wait through all of Prime Time television and then have to decipher whether you see a brown ring inside of the orange and yellow muck.

I can imagine Humphrey getting all crazy-like during the two hours and driving his poor wife batty. I don’t buy that  Humphrey is a doctor, he lied.  He looks like a news anchorman or a Mercedes salesman.   He might be classy, but he will definitely talk your ear off.  He appears a decade or two older than the average  father of a newborn.  That’s why he’s on the verge of falling onto the little lady.  Humphrey  just screwed his retirement plans. 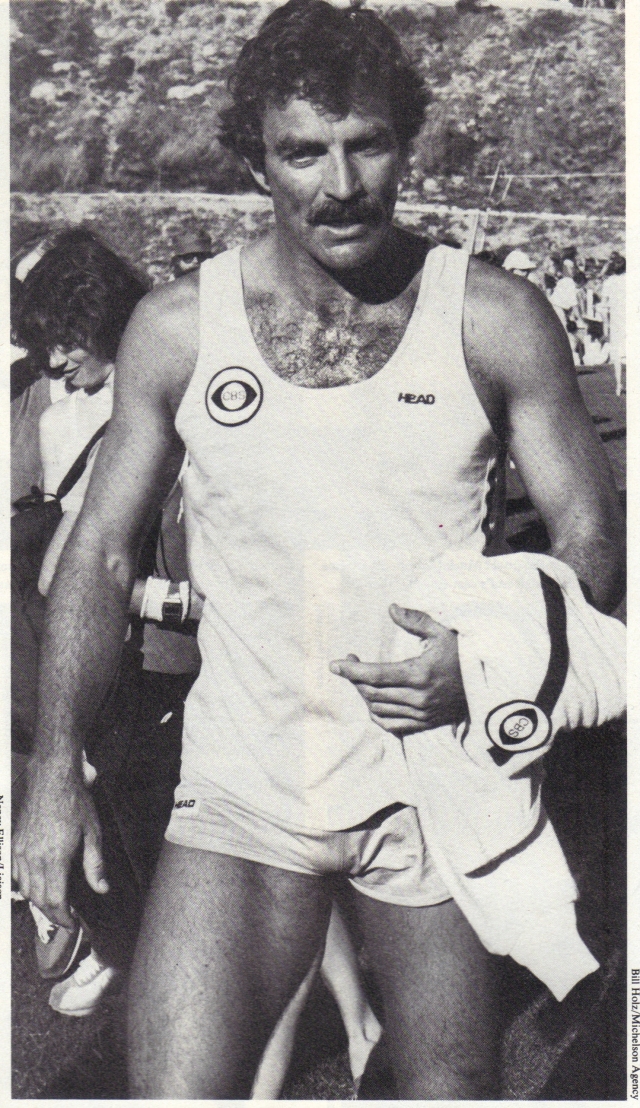 I was planning on saving this for the end, but I just showed you panty hose and a home pregnancy test.  I need to swing the mood to something more masculine or I am going to lose readers.  This is the best photo to complete that job.  It’s Tom Selleck and he’s covered in all that Tom Selleck hair!   Those shorts are a thing of strange beauty that must have only worked in the 1980’s.  I’m sure every woman and gay man alive thought Tom was IT for them.  Also, notice that he wears CBS logo clothes?  Can you imagine stars today walking around in shirts carrying the name of the place that pays them?

This was the last photo I took and it was after beating a housefly with this issue…so the magazine did not lie flat for the scan.

I haven’t see Raiders of the Lost Ark in years.  But I remember thinking it was a better than average flick.  The reviewer of the film rips it apart as though it’s just as poorly directed as Howard The Duck.

…our hero is never allowed to display any emotional attachment to anyone or anything except his trusty whip.

Of course not, he’s Harrison Ford, not Robert Redford.  Love for his whip is what we want from him.  Dr. Jones doesn’t need a  lady friend tying him down.  He needs to travel the world and save archeological artifacts.

Daughter: Here ya go dad, Happy Birthday!
Dad: Sweetie! You are so thoughtful, what is it?
Daughter: I love you dad and I love our Benson & Hedges smoke breaks together to escape  my crazy mother.  Here’s a box business cards for lung cancer specialists.
* they cry a little, and then light up*

There’s more.  I might let you see it later.  I also bought one issue from 1984 with a cover story about Micheal Jackson and his women, plural.  I need to get to the bottom of that ASAP.

killing spiders with my laser eyes.
View all posts by kristiane →
This entry was posted in Blogroll, family, funner, happiness, health, how to, Life and tagged 1981, Harison Ford, magazines, Michael Jackson, Smoking, tabloids, Tom Selleck, US Weekly. Bookmark the permalink.