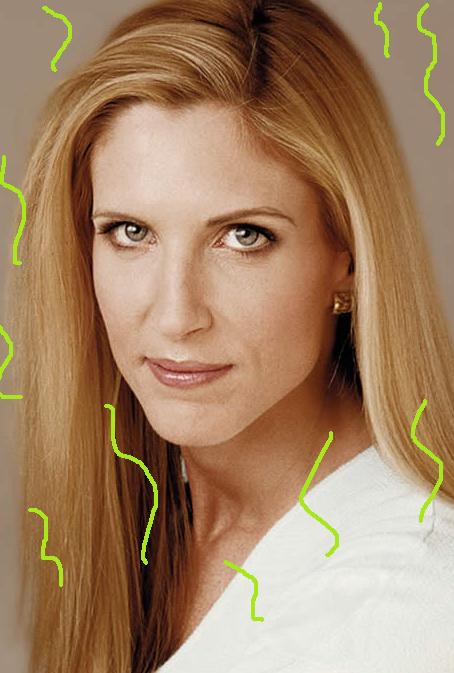 I don’t like the woman’s thoughts.     She has  outrageous opinions.  She yells them on TV.  She might smell, but I made that part up.

You may have heard the lady has a new book sure to be a best seller,   Guilty: Liberal “Victims” and Their Assault on America. Right wing talk radio lovers will eat it up, and progressive granola crunchers will tear it to shreds.  The whole idea of writing a shock book doesn’t usually rile me.  Usually.

However, there is one part of her book which I heard about on a radio show this morning that actually made me angry.  Some little snide and snooty comment that hit a bit too close to home.

“Countless studies on the subject make clear, look at almost any societal problem and you’ll find it is really a problem of single mothers.”

“Single motherhood is like a farm team for future criminals and social outcasts.”

This is fun…let’s do one more!

“the children of divorce,” or as I call them, “future strippers.” It is a mark of how attractive it is to be a phony victim that divorcées will often claim to belong to the more disreputable category of “single mothers.”

Let’s not sit and debate her comments, it would be pointless.  She aimed at shocking the masses, and congrats non-mother, you did!   Regardless of the percentages of criminals that come from single or double parent households, the whole world knows that fine citizens CAN come from either…and awful humans can also be a spawn of either type of child rearing.

Instead, since this is MY blog, I will tell you my own personal problem with her words:

I married at 20, had a baby at 22 and then left the guy at 23.  So, I was 23, looked like I was 18 and suddenly I was a single mother.  I will be frank: I was humiliated.  I grew up in schools and had family that treated single mothers as less than real mothers.  Immediately I received pity for a situation that sucked, but that I had chosen through and through.   I was not heartbroken and carried no longing for my ex-husband but never removed the wedding band from my ring finger because I hated the looks I felt I was getting in grocery stores when my two year old would act like a two year old.    It took a harsh conversation from a friend to convince me that though I knew I was a legitimate mother, the whole world could as well.

It did not stop the comments, however.  I had one person who I think very highly of, make a remark about how sorry he felt for me as a single mother.  Sure, it’s tough.  Motherhood is tough.  My older sister with a kind loving husband who brings home the bacon so she can stay at home with her kids calls me often at the end of the day to remark at how tough a day she had because the kids drove her batty.  No one feels the need to tell her they feel sorry for her.

Throughout the first couple years I was single, I received both financial and emotional support from family and friends that helped me move on.  However, had I still been married and had those same problems, I can bet I would have had the same help.

Now, I still have a tough time going to school functions and such because I do look a bit younger and I get those fears that the other, older parents will be looking my way and think…”Babies having babies.”   And I bet some do, but for the most part I am treated like everyone else.  And all my apprehensions in this area come from ME and only ME.

Everyone I have met since having Max assumes that I either A) had a shot gun wedding or B) had a child out of marriage.  And literally every person who I have the marraige/kids/divorce conversation with asks how old I was when I married then how old I was when I had max.  Their voices become silent as they count two years in between those days and they realize I married before I got pregnant after which the conversation continues.

My sister does not get asked these questions.  My mother did not get asked.  I did not get asked, while I was married.  I completely agree and understand that it could be easier with two parents at home…could.  Ann is not alone in her stupidity, plenty of people feel that way.  But I choose to call her out because she is the one who decides to make her false claims, call them fact and take up too much time on the television.  Ann Coulter breeds  idiotic thinking.

We are not in a society that couples stay married throughout everything any longer.  I believe that marriage should be looked at as a forever deal, and I did approach mine that way as well.    And it failed.  And thankfully, I was able to go the the courthouse, give them my money and have them grant me a do-over, or a do-again-never.  I get my choice.  As for single mothers who had children while unmarried, they get that same freedom to choose if they wish to be married to the father.  America’s fun like that.  I might stay here.

Someday, Ms. Coulter, I may be married.  Someday I may even be divorced again.  And someday I may decide to like girls and go to the sperm bank and become pregnant with 8 babies while living with my lesbian lover. But I will always be a mother with no prefix.  Not a single-married-divorced-tansgender mother.  Just a mother.  And in any of these situations, my son will have the same love and care.  Because I will never see my role in his life any differently, no matter who sleeps in my bed.

killing spiders with my laser eyes.
View all posts by kristiane →
This entry was posted in blogging, Blogroll, family, funner, happiness, health, how to, kids, Life, politics. Bookmark the permalink.