I saw a magazine article the other day titled something like, “How to dress 90s”.  This means I’m old.  The 90s were my decade.  I spent middle school, high school and a few years of college within this quickly changing decade.  We started with Walkmans and ended with Napster.  In the early 90s I had pen pals who sent me real letters with stamps and at the end I had an email address.  I think it would be completely fun if we talked about what should return in the comeback of the 90s and what should not.  Shall we?

Gwen Stafani did these well.  They were so easy, and supposed to look messy, so if you had to pull a sweatshirt over your head the results worked for you.  I would gladly accept this trend back into my life.

Should Not Return:  Heroin Chic

The desire to look unhealthy and addicted to a terrible all-consuming drug is easily scoffed, but it was a fad.  Please stay in our history silly trend.

I don’t really care if Oasis comes out with any new music.  I do feel their songs were intelligent for top 40 music.  I’d like to have those old songs invade current radio as though they were new.  But I won’t listen to any MTV news stories about the brothers’ fights.  Get along boys or go to your room.

Should Not Return: Pacifier Necklaces

Apparently you were supposed to wear these to gnaw on when you were taking some drug that might make you chew up your tongue.  Can someone confirm this for me?  Either way, I never thought it was cute, just annoying.

Should Return: Platform Shoes of all Kinds

Sporty is too active for the style, but the rest of those Spic Girls are rocking unnecessarily tall platforms.  I liked this concept.  I’m also short, so…

Should Not Return: Shiny Metallic Clothes

So, the internet was new to most of us.  Cyber fashion soon followed.  Were we trying to look like the inside of our Compaq Presarios?  I was a serious offender.  If a metallic purse or shiny pair of pants came into my vision while at the mall, I often bought it.

Should Return: Dresses and Boots

Looks at me!  I have a pretty, sweet and flowered dress.  I’m also going to kick you with these combat boots!

Should Not Return: Beanie Babies 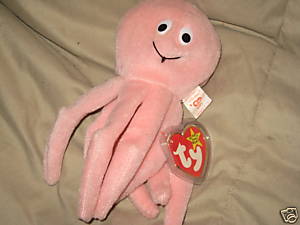 I once saw a kiosk at the mall with beanie babies priced as high as 795 dollars.  This is plain dumb.  I don’t blame anyone for liking them, they were cute and all.  But the price people paid for them is and was absolutely insane.  Especially considering the prices skyrocketed a couple years after they came out, as though they were rare and old antiques.

It was music as well as clothing.  And it was easy.  T-shirts, flannels, comfy shoes?  Yes please.  The whole grunge era really took up only a few years in the 90s, but it seems to be what many think of when the decade is mentioned.  It was a great relief from the skin tight jeans and florescent shirts of the previous years.

Should Not return: JNCO jeans

Sadly, I had many outfits that looked just like this.  I have no excuse.

Many who enjoys Saturday Night Live have their favorite cast or season.  Some of you like other eras over this.  But you are wrong.  I’m gonna say roughly mid 80’s to mid 90’s were the best years.  But the last half of that ten year period has never been topped.

Should Not Return: Snow

I have no idea what he’s saying, turn that noise down and GET OFF MY LAWN!

Should Not Return: OJ Simpson

For years, we had the privilege of hearing how the murder trial was going for OJ.  We watched and re-watched the car chase.  We saw him try on a glove over and over.  We learned who Johnnie Cochran was.  Everyone formed an opinion on the trial.  When they read the verdict live on TV my teacher stopped class to let us watch.  So many hours of so many lives wasted worrying about this man and his life.

There’s still chat rooms out there.  They are not used as they once were.  So many sites had a chat room attached to them in the late 90s.  A/S/L?  Remember that?  Remember talking to one or two people in a room where thirty or forty people were also having conversations?  That was funny.  Let’s do that again.

Should Not Return:  Dial-up Internet