There’s this guy I know, I was going to aim for polite and refer to him by another name, but you would have known I was lying from the first picture I want to show you: 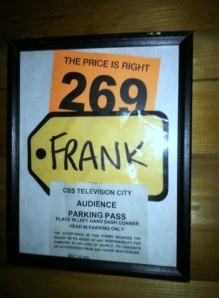 This is Frank’s name tag from none other than the best morning game show of all time, The Price Is Right.  Only knowing that he has been to the show, you already know he’s a swell guy.  One of my favorite things about visiting Frank is knowing that the most recent episode of the game show will have been saved on DVR and we will watch it.  He also records Jeopardy, pausing the show after each question so we all can discuss what the correct response is before resuming the game to see that most of us were usually wrong.

I visit Frank enough that I have begun to feel comfortable rummaging through his cupboards while whipping up something to eat.  Frank’s pantry is a treasure of fantastic old stuff.  Sure, there’s edible fresh food as well, but that would make for a terrible blog post.  Let me show you some of the items that should have been tossed years ago, but which now will never be.  I won’t allow it.

Let’s start in the garage.  On Frank’s work bench there’s plenty of coffee cans with odds and ends stored.  Some cans are newer, some are Yuban cans appearing to be from the 1960’s.  How is this not rusted over?

This isn’t food stuff, but I wanted to show them anyhow.  I’m guessing these sandals would have fit a one or two year old boy in 1981.  They’re still sitting in the entryway of the basement entrance of the house.  I might end up stealing them for Lucy.

Now we’re getting to the good stuff.  Metal Band-Aid containers.   They haven’t made them in years.  Are there still band-aids in here?  You bet your paper cut finger there are.

Next to the back up cans of vegetables and coffee in the pantry is a vintage Scooby-Doo cup from the late 1970’s.

On the top shelf are aging cans and bottles, tons of them.  I’m only showing a small sample here. Mash beer?  A pop top can of Shasta Creme Soda.  And BEER Beer. I used to work at a grocery store that sold this stuff, and while I never had the privileged, I was always so curious to know what generic beer tasted like.

Speaking of beer, you don’t remember this one.  Oly Gold was the first Miller 64 plus six calories.  Both are terrible, only one is still made.  A review from beeradvocate.com, ” Sour, bitter, funky flavor that is dominated by corn and a**. I won’t even boil my brats in this swill.”  So this unopened can ought to stay unopened.

YAY!   Billy Beer! Brought to you by Jimmy Carter’s younger drunk brother.  Years ago (and it boggles my mind that it has in fact been years) Billy of Veggiemacabre.TV sent me a Billy Beer t-shirt with the instructions that I was to wear it while drinking beer and take a picture.  Somehow I never remembered to do that, until today.  Cheers!

There ya go, five years late.

Alright, one more thing to show.  Spices, from Safeway sitting next to the items Frank bought just this week like nothing is weird at all.  Clearly those labels and prices are ancient, but how old are they?

They expired over thirty years ago.  Who knows when they were actually made.  After pointing out the dated wares to Frank, I also requested he never throw them out.  Wood paneled tin cans, in reality, should be in every cupboard.

After snapping photos, I told Frank I was going to write up a blog about the old stuff.  He asked if I made it to the medicine cabinet, as there is some treasures in there as well.  Darnit!  I always thought those were off limits.  Maybe next time 😉